MADISON –The Final Environmental Impact Statement (EIS) for the Air National Guard F-35A Operational Beddown has now been posted in the Federal Register. This is the final step in a lengthy process for selecting the 115th Fighter Wing as the next location for an F-35 mission. The Secretary of the United States Air Force will sign the Record of Decision, following a 30-day waiting period, no sooner than March 30th.

The Final EIS refutes several false narratives pushed by opponents of the project;

There will be no nuclear weapons at Truax:

Despite constant attempts to generate fear in the community by opponents, at every step in the process the Air Force has made it 100% clear that there will be no nuclear weapons at Truax. They have told opponents that directly in meetings, shared it with the members of Congress to relay the information to opponents and have now included the following language in the Final EIS Executive Summary to make it abundantly clear;

Despite direct communication with Air Force officials and communications by members of the Congressional delegation, opponents continue to press the narrative that the F-35 will be “4x as loud” as the F-16s.

“Four times louder would be represented by an increase of 20dB. There is nothing in the FEIS that indicates the F-35 will be 20dB louder than the F-16 at any location around Truax Field. Table Wl3.1-12 in the FEIS indicates that for most points of interest, the increase in noise from the F-16 to the F-35 is between O and 4dBA.”
[Source Pg 14 of letter to Mayor Rhodes-Conway]

There is no need for afterburner use with F-35s:

The Final EIS reiterates messages that have been consistently conveyed regarding afterburner use and the F-35s, that even under the worst-case scenario for weather conditions there would be no need for afterburner use at Truax. The Final EIS models the usage at 5% to ensure it is considered in the analysis.

Pilots use Takeoff and Landing Data (TOLD) to predict takeoff distance for a given set of conditions and to determine if they need afterburner for takeoff. TOLD takes into account runway length, temperature, humidity, runway elevation above sea level, wind, and aircraft weight. If the TOLD predicts that the takeoff distance exceeds 50% of the runway length, then afterburner is required for takeoff.

The TOLD predicts that F-35 pilots will not have to use afterburner for takeoff from Truax Field in even the worst performance conditions which is a hot, humid day. In the time that the 158FW in Burlington, VT has operated F-35s, since September of 2019, their pilots have not had to use afterburner on any of their takeoffs. The pilots found the TOLD data to be accurate. It’s worth noting that Burlington’s runway is slight shorter than Madison’s 9K’ runway.
[Source Pg 14 of DMA letter to Mayor Rhodes-Conway]

Incompatible use does not mean uninhabitable:

Both the Air Force and the City of Madison, as well as countless others have combatted the fear mongering by opponents, who have stated that the F-35 basing will make areas around the airport uninhabitable and that homes will have to be torn down and people will be forced to move. “Incompatible use” does not mean non-livable conditions. In fact, there are many communities/neighborhoods throughout the country with residential development, and other sensitive land uses, within airport high noise areas or zones.

The Final EIS contains correspondence between the acting Secretary of the Air Force and US Senator Tammy Baldwin confirming that the 100% home station training numbers at Truax are a “conservative estimate” to show the maximum potential impact and that historical operations will result in a reduction of proposed noise.

Furthermore, interim Adjutant General Joane Mathews in her letter to Mayor Rhodes-Conway notes that the Final EIS does not include other noise mitigating best management practices like Air-to-Air refueling or off-station flying.

Best Management Practices such as Air-to-Air refueling are not addressed in FEIS as the scheduling of such operations are not a certainty. The 115 FW does currently utilize Air-to-Air refueling to accomplish training requirements with less sorties and anticipates executing similar training strategies with F-35 aircraft.

The FEIS also does not account for flying that the 115FW does off station in locations other than Truax Field. The 115FW regularly trains at bases such as Nellis Air Force base or goes overseas about once a year. This off station flying directly reduces the number of operations at Truax Field. Since these commitments are difficult to project for future years, the FEIS makes a conservative assumption that all flying will be done at home station.

The Air Force has also confirmed that the EIS does not account for mitigation efforts that the 115th Fighter Wing has historically employed as part of its longstanding community partnership with Dane County Regional Airport. Employment of these mitigation efforts and flying as expected at historic operational levels will significantly reduce the projected noise contours highlighted in the Draft EIS.

Q4: “Are there strategies the USAF can use to reduce the area of residential land included in the 64-75 dB DNL range?” A4: There are several operational changes that could reduce the area subjected to additional noise. Steeper departure and approach angles, less nighttime training, less aircraft/sorties, and restricted afterburner use have been effective in other locations.

Noise from the 115th Fighter Wing is brief and infrequent:

Opponents have consistently asserted the F-35s will create continuous noise. That is absolutely false. The schedule of flights will remain the same as the F-16s; 4 days a week, a launch around 9:00 a.m. and a landing around 1.5 hours later and then a launch around 1:00 p.m, and a landing around 1.5 hours later. The draft EIS contains a higher DNL because there may be 1-2 additional aircraft that take off each day as pilots get certified on the new aircraft.

The F-35 has absolutely nothing to do with PFAs:

Despite efforts to conflate the two issues, Dane County Regional Airport is mandated by the Federal Aviation Administration to use Aqueous Film Forming Foam (AFFF) that contain PFAs. Because the 115th Fighter Wing provides the firefighting support to the airport, they are the ones that are required to have the AFFF. It has nothing to do with the F-35.

Because there is new construction associated with the F-35 beddown, any contamination that is encountered will be mitigated with funds released for construction, and remove the Wisconsin Department of Military Affairs from having to compete for funding from other sources for mitigation.

“The use of Aqueous Film Forming Foam (AFFF) containing PFAs is mandated by the Federal Aviation Administration (FAA) for certified airports like DCRA… In August of 2015, the Truax Field Fire Department stopped testing and training with AFFF systems on ARFF vehicles by flowing AFFF external to the system. AFFF fire extinguishing techniques are still taught as part of the normal training syllabus, however, AFFF is not dispensed during local training.”

“If selected as the 5th Operational Beddown location for the F-35, the 115th Fighter Wing will conduct multiple construction projects which will provide the opportunity to mitigate any contamination encountered. The Air National Guard has agreed to prepare Material Management Plans for approval by the WI DNR and has started that effort. Construction projects include funding for remediation efforts and will not need to compete for funding from other sources. Construction activities, to include the handling, mitigation, and disposal or other disposition of contamination discovered before or during the construction activity, will proceed in accordance with all applicable legal requirements.”
[Source: Pg 17 of DMA letter to Mayor Rhodes-Conway]

As the Wisconsin State Journal Editorialized in their support for the basing, the Final EIS dispels fears that have been proffered by opponents and reinforces that Madison is the top choice for the United States Air Force. It is time to move past the misinformation and unsubstantiated comments and move forward as a community to recognize and celebrate the accomplishments of our friends, neighbors and co-workers who make up the 1,650 people who live in the community and work at the base and their families. 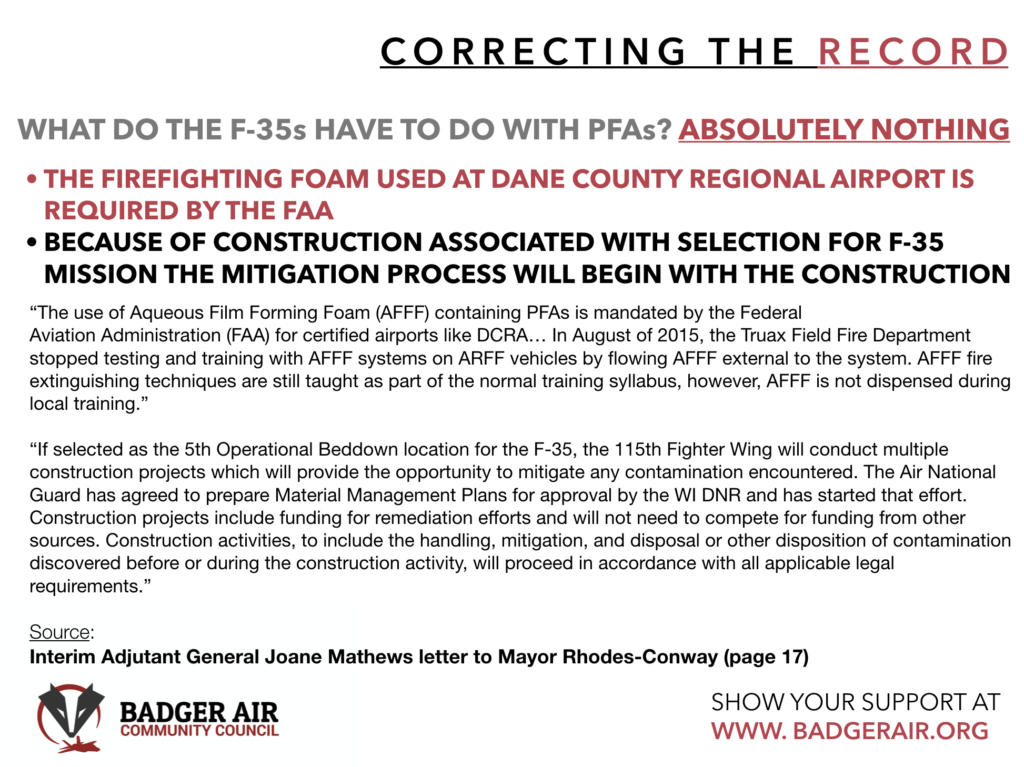 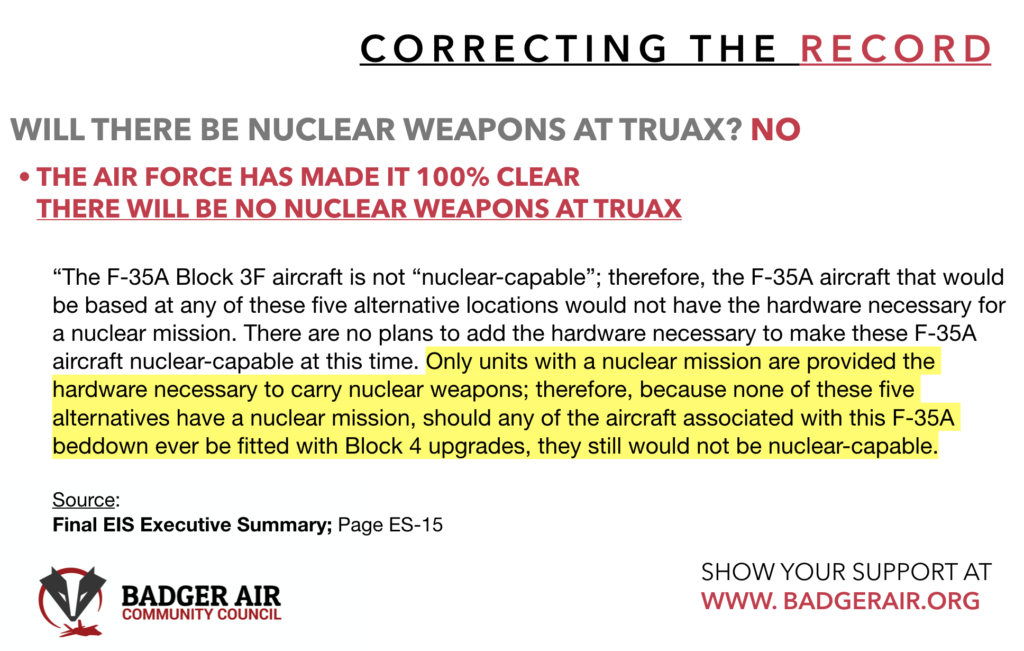 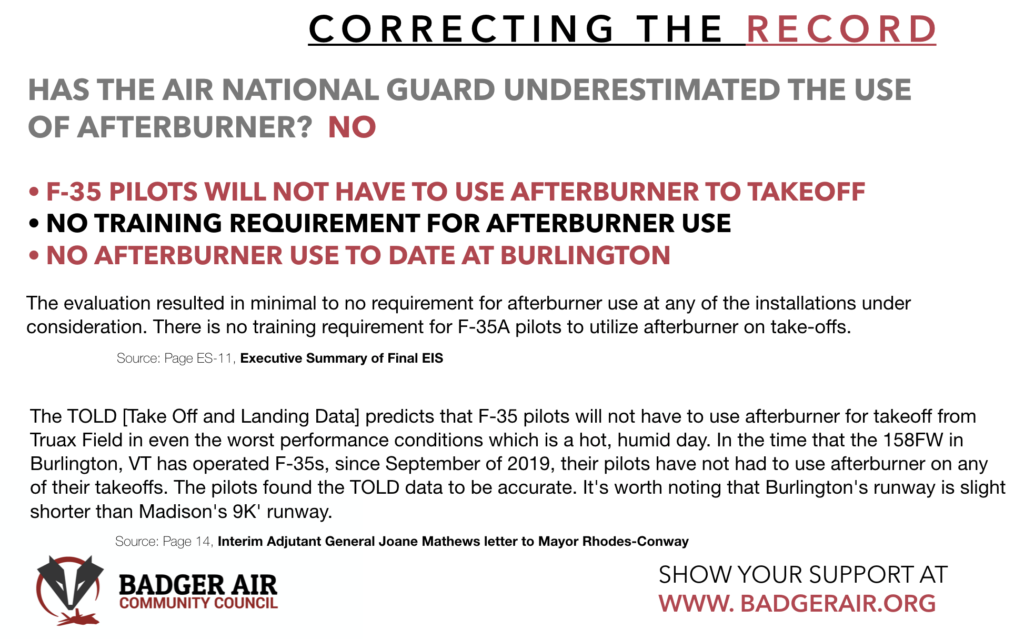 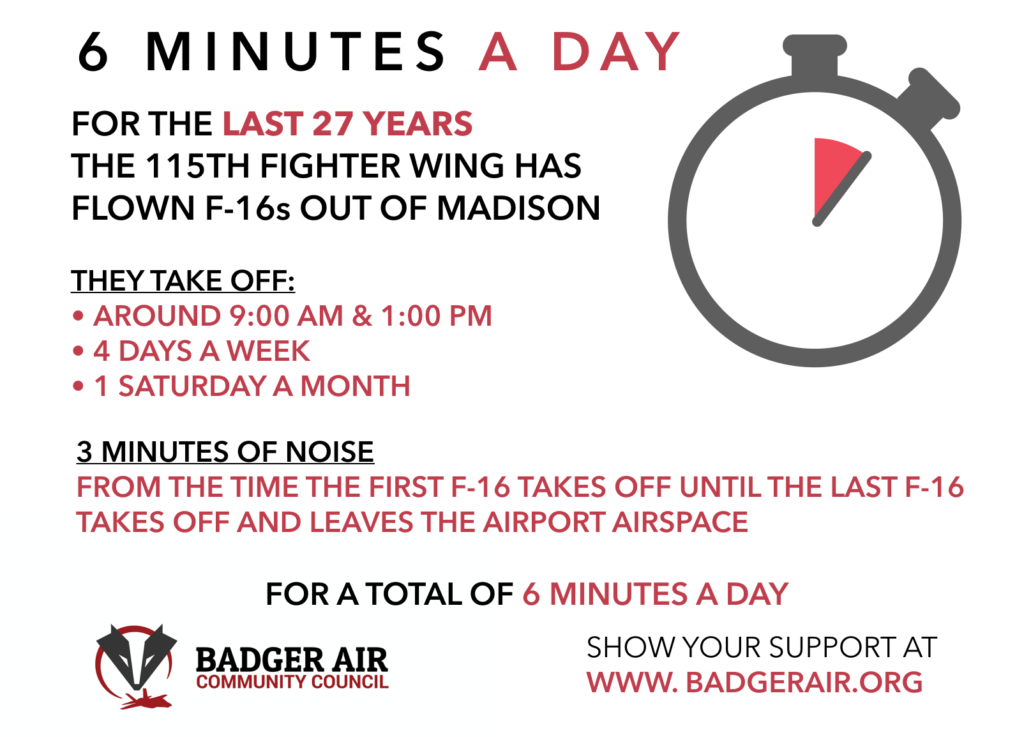